With the course announcement – one of the most anticipated moments for racers and for all those fans who will follow the race trackside, or from home – the Enduro World Series week officially kicked off in Finale.
At the 2021 edition – despite having played host to enduro racing for no less than twelve years, including nine rounds of the Enduro World Series – the Ligurian venue manages once again to amaze and innovate, thanks to new trails – through beech woods and villages with fortresses and castles – and the same breathtaking views over the sea we are used to… and with a race course that covers an area that has never been so wide – from Finale Ligure to Pietra Ligure, throughout Finalborgo, Monte Grosso and the municipalities of Orco Feglino, Calice Ligure, Borgio Verezzi and Tovo San Giacomo
The race courses of Bluegrass EWS Finale presented by Vittoria are basically two: one for the mountain bike EWS race and the other for the EWS-E, with tracks especially dedicated to pedal-assisted bikes.
For both competitions, race base and event village will be located in Piazza Vittorio Emanuele II on the beautiful seafront of Finale Ligure; all riders will take off and come back here, where the large stage for the award ceremony will also be installed; however, both Finalborgo and the nearby Pietra Ligure will be important hubs for the event too.
The EWS-E course (e-bike race) consists of twelve timed stages divided into three loops, with two breaks in Pietra Ligure for battery recharge and technical assistance in between. The race course is 73 km long, with 3,042 meters of total elevation difference. Three stages are Power Stages which, unlike the others, are short, super intense and almost completely uphill: a real show for the public.
The race begins in Finale Ligure and, after going through Verezzi, moves towards Pietra Ligure and the Monte Grosso trail area, where many of the race’s trails are located. This is a real testament to the commitment of Pietra Ligure’s administration to the development and investment in support of all e-bike enthusiasts. But that’s not all: after showcasing the trail area of Monte Carmo in 2020 and this year’s Monte Grosso, Pietra Ligure Outdoor can’t wait to present us with the Ranzi area, just groomed and full of amazing, still unknown, trails, which will be available to e-bike riders as the Training Area and will soon become part of the e-MTB offer in Pietra Ligure.
The schedule of the Bluegrass EWS-E Finale presented by Vittoria is quite intense, with Open Practice on Wednesday and both PRO and amateur races – EWS-E 100 and EWS-50 – on Thursday. There is great anticipation of the upcoming event and the spectacle that is about to happen, with several big names who have already entered the race, like Julien Absalon, two-time cross-country Olympic champion and Marco Melandri, the famous MotoGp rider who is now a great enthusiast of e-bike racing. 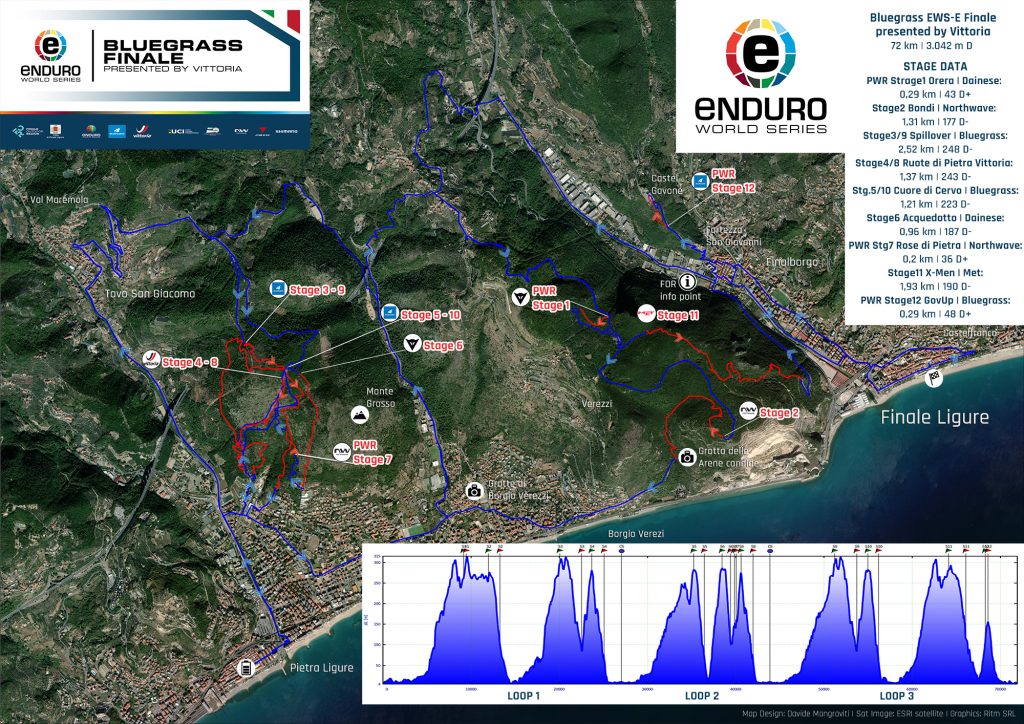 For the EWS (open to traditional mountain bikes), FinalEnduro organizers have planned a more compact race course, all within the classic Finale’s area, between the sea and the hilly hinterland around the famous ex Nato Base. Competitors will battle it out on five timed stages, over a total length of 53 km and 2,190 meter of elevation difference.
The trail of the first stage, known as Base Nato, is new to EWS racing but is the first downhill trail created in Finale back in 2000 by trail builder Fulvio Balbi.
Finalborgo will once again play an important role as, beside the last stage of the EWS-E race – the Govup Power Stage – it will also host the EWS Pro Stage on Saturday afternoon, which will then be repeated as the fourth and final stage on Sunday.
Final-borgo is the name of this spectacular stage that from Castel Gavone drops into the village, passing throughout Fortezza San Giovanni: the perfect way to end a day of riding in the hinterland.
The schedule of Bluegrass EWS Finale presented by Vittoria is packed with events: Open Practice on Friday, Final-borgo Pro Stage plus EWS-100 and EWS-80 races for amateurs on Saturday, before the remaining four EWS special stages on Sunday. 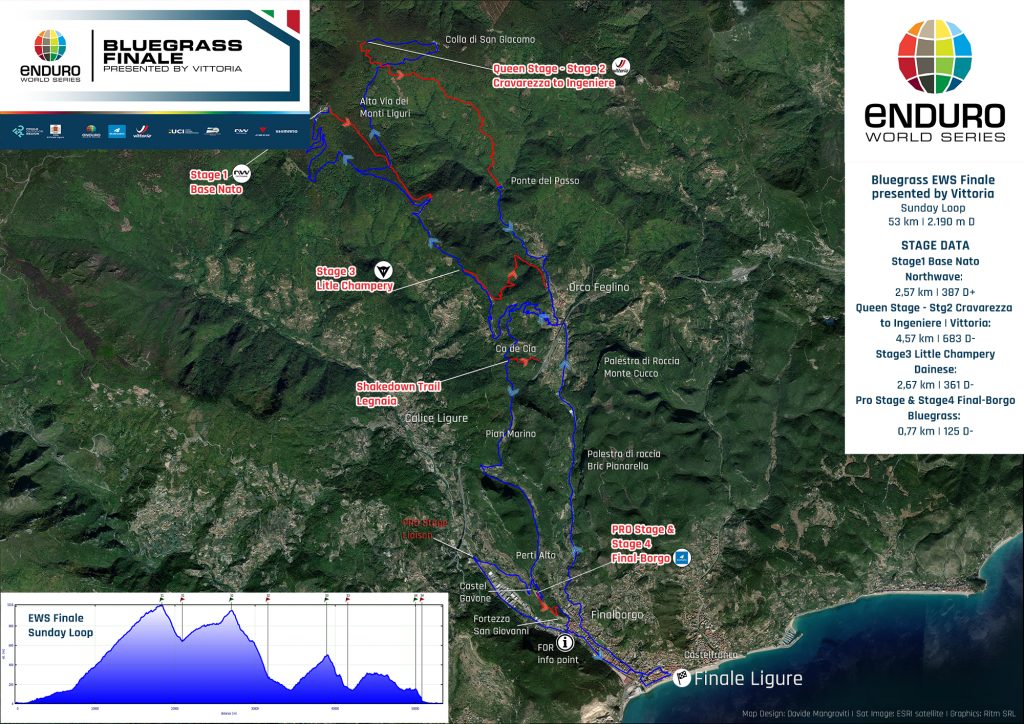 All eyes are on the battle at the top: in the men’s field between Richie Rude and Jack Moir and the tight race, fully French, between Melanie Pugin and Isabeau Courdurier amongst the women. All Italy’s top riders will be there too, including Sophie Riva, from Valle d’Aosta, who has already stepped on the Under 21 podium this year, and some local, fast riders, such as Fabio Grillanda and Lorenzo Folco.
The ingredients for yet another great event will all be there, including the spectators – we cannot wait to find again all of you along the trails cheering on the riders, having fun, mindful of the rules and so warm!