The journey of the Enduro World Series continues – as it finally reaches Finale Outdoor Region’s trails. The race courses of the 2022 edition, specially designed for each race formats, bring to the fore the unique beauty of this venue on the Ligurian Riviera

The moment most anticipated by riders and enthusiasts has come; the announcement that matters to everyone, people on the ground and partners alike; the clear signal that racing time is about to happen: the 2022 race courses are finally out.
From 29 September to 2 October Finale will play host to two major competitions: the grand finale of EWS-E, the series dedicated to e-bike enduro racing and, immediately after that, the Bluegrass Trophy of Nations UCI Championship team race.
Due to the particular nature and race format of the two events, the organizers have created two race courses that are completely different in terms of character and setting they take place in. 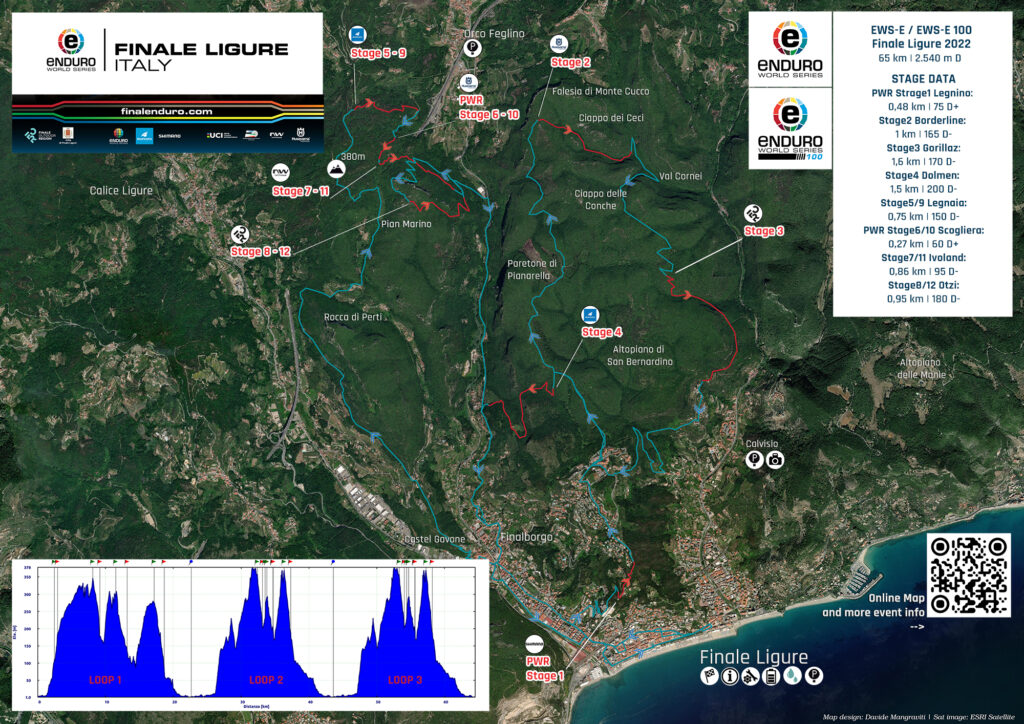 The race course of the EWS-E Pro consists of three loops within the municipalities of Finale Ligure, Orco Feglino and Calice Ligure, only interrupted by the riders’ return to Finale for battery swap, tech support and refreshments in the paddocks. The first loop includes four Special Stages, including the Power Stage (the uphill stage), a total of 21 kilometres and 900 vertical meters. This part of the race makes a wide lap around the Altopiano di San Bernardino, skirting several famous crags – such as Paretone di Pianarella, or those on Monte Cucco – and other historical sites known as Ciappi dei Ceci and Ciappi delle Conche. The routes for loop two and three are the same and go across the natural area that stretches between the two valleys of Calice Ligure and Orco Feglino, from Rocca di Perti throughout to Pian Marino. The loops feature four Special Stages each, including the Power Stage, for a total of 21 kilometres and 800 m of elevation difference.
EWS-E100, the competition dedicated to amateurs, takes place over the same course as the Pro race, while that of the EWS-E50 includes only the first and second loop. Two very inspired Italian riders will be racing: Alia Marcellini (Fulgur Factory Team – Valdinievole) and Andrea Garibbo (Haibike Team). Both of them have been on the podium several times this season and are currently at the top of their categories: worth keeping an eye on them during the Series’ grand finale.

“The idea behind the 2022 EWS-E race course is that of showcasing trails that are well suited for pedal-assist bikes while highlighting how easy it is to link them with amazing liaisons, even on singletrack – spectacular trails that are as fun as the downhills they connect” explains Riccardo Negro of FOR. In all respects, this offers a new way to enjoy the plateaux along the coast: in the saddle of an e-MTB, they become accessible in their entirety. 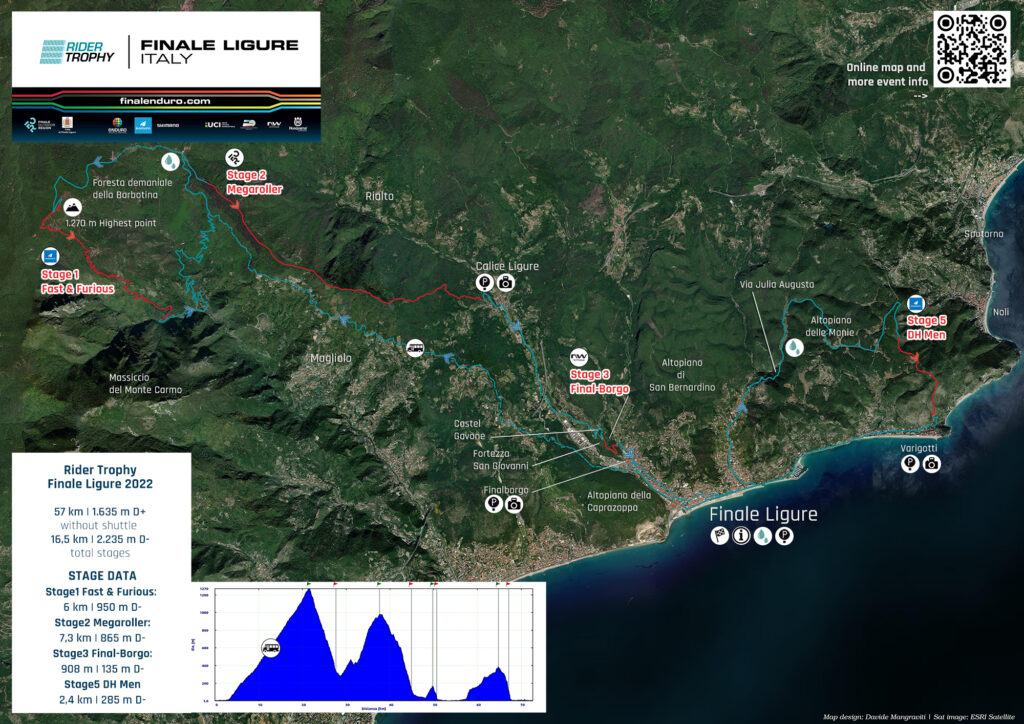 The race course of the Bluegrass Trophy of Nations covers a much wider area that from the mountains in the hinterland of Calizzano and Pietra Ligure meanders down to the coast, passing through the municipalities of Rialto, Magliolo, Calice Ligure and Finale Ligure. Overall, the race consists of five Special Stages over a distance of 80 kilometres and 3,000 vertical metres. Of these, 15 km and 1,000 m will be facilitated by shuttles that all participants will be able to board immediately after leaving the stage at the start. Thanks to the uplift assistance, they will reach the start of the first Special Stage at 1,300 m of elevation, within the Barbottina state-owned forest, an amazing beech forest in the Ligurian hinterland. This is where they will ride the long flow trails of the first two Special Stages, Fast and Furious and Megaroller – some of the most iconic lines in Val Maremola. Special Stage 2 will bring riders down to the coast, ready to face the third challenge of the day – Final-Borgo – a spectacular Special Stage that is short but very technical and that from Fortezza San Giovanni drops straight into Finalborgo. After a short tech stop in the paddock area, at the Time Control, it will be time for the last two Special Stages of the day, which showcase the plateaux of San Bernardino (Special Stage 4, Ruggetta) and Le Manie (Special Stage 5, DH Men), an area used by man since Roman and pre-Roman times and so unique to Finale Outdoor Region.
Industry Trophy and Rider Trophy, the competitions for amateur racers, will share the same course as the Trophy of Nations, with the exception of the Rider Trophy that will not include Special Stage 4.
The 2022 edition of Bluegrass Trophy of Nations will come to its close in Piazza Vittorio Emanuele II, in Finale Ligure, with the great award ceremony of the winning teams – they will receive the medal and the special UCI jersey during one of the most emotional and evocative ceremonies of the MTB world scene.
And new for 2022: maps of the two race courses – thought for the public to fully enjoy the action of the Special Stages – will be available online, through the linktree on the Instagram page or from the QR code also printed on the paper maps. In addition to the race courses, the online maps will show parking areas and access points for spectators, a way to make the great spectacle of the Enduro World Series even easier and safer to enjoy. 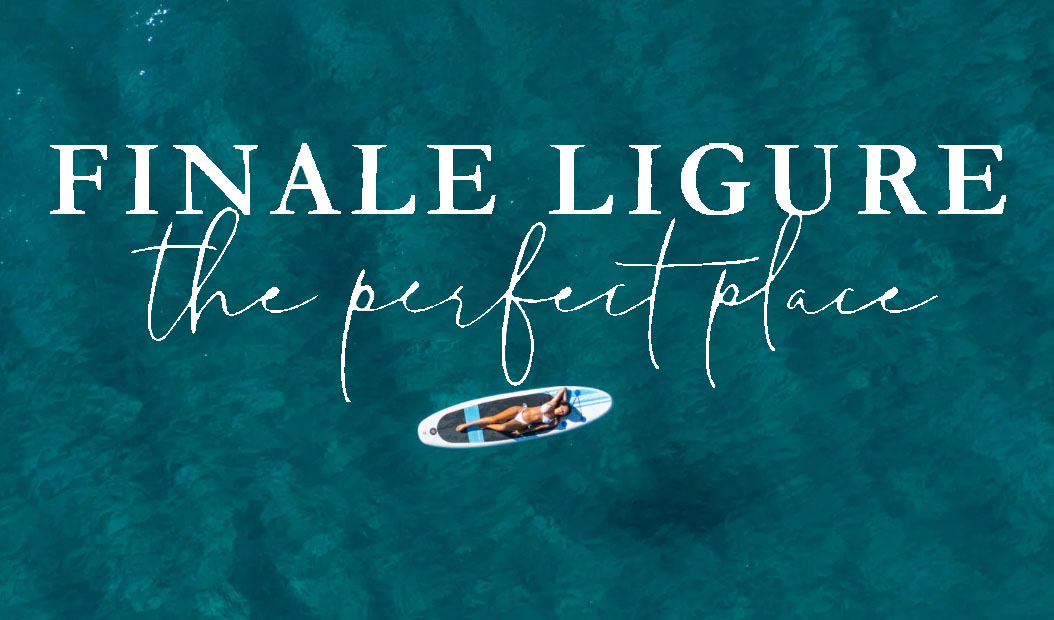